This is a step-by-step guide to install Harbour and QtContribs from source code.

Our goal is to create a self-contained setup that can be used on a development workstation alongside different versions of Harbour and Qt.

In this setup, Harbour is never “installed” but just compiled with proper settings and only environment variables are set.

Since the nigthly build of Harbour uses an old version of the compiler not compatible with recent Qt, it is necessary to build Harbour ourselves.

If we want to be able to easily receive the updates from Harbour and QtContribs projects we should use git and svn. Otherwise you can simply download the source zip files and unpack them.
I suggest to use git and svn to download source code.

So proceed to install git and svn (TortoiseSVN, from sourceforge).

This is the version available on april 2, 2014. I use the android version since this is a system-wide installation and I will use it for Android development.

Install it using default dir (c:\qt\qt5.2.1). In “Select Components” open Tools and select MinGW 4.8: this will install the compiler used to build Qt and it is the compiler we will use to compile Harbour to have maximum compatibility. In the past I also installed Qt source code but I don’t do anymore…

Proceed with installation but do not launch Qt Creator at the end since we don’t need it.

I put all these source code in a directory called cvs in c:
In this directory I put all the configuration files (see below) and the source dirs.

It takes some time.
Please note that we specify harbour as last parameter in the git command: it will create a clone of the repository in a directory called harbour. You should have now a c:\cvs\harbour\README.md file.

You can download the source code as a zip file clicking on the button on the right ( https://github.com/harbour/core.git ), unzipping and move/rename the directories to have the README.md file in the position shown above.

If you want to create multiple parallel versions of Harbour, for example one for production code and one to test new features, you can clone Harbour changing the last paramenter.

Now it is time to set the environment. I never do this in a system-wide setting but use a batch file that I call after the Qt version or the specific use of that setup.
This file sets the environment variables needed to compile and use Harbour and I called it set_qt521.bat.

Let’s examine the dirs of PATH:

QT_PLUGIN_PATH is needed to run programs that use Qt.
HB_WITH_QT specifies at build time which version of Qt we want to use
HB_QT_MAJOR_VER specifies which Qt major version we are using. It may be removed in the future

It is now easy to create copies of this file and adapt the dirs to use other Qt versions or other Harbour dirs.

Harbour will be compiled. It is normal that near the end there are some warnings/errors during compilation of contribs: the build process checks for the presence of supported libraries and skip build if they are not present.

When compilation is terminated we can check:

With TortoiseSVN do a checkout of the repository, using data as per the following screenshot. If you are behind a firewall, use http instead of svn in the url (http://svn….)
(To help with copy&paste: svn://svn.code.sf.net/p/qtcontribs/code/trunk C:\cvs\harbour\addons ) 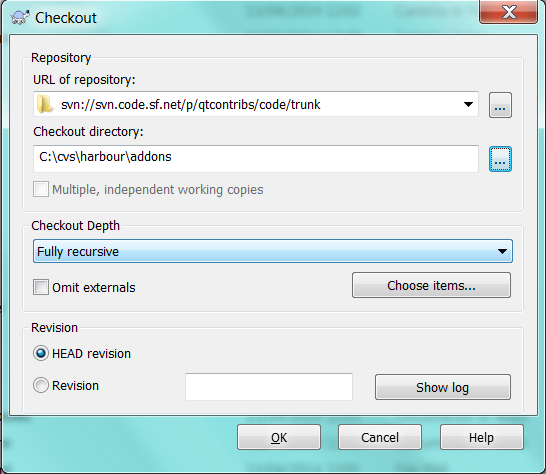 You now have this file:
c:\cvs\harbour\addons\qtcontribs.hbp

You can download the source file zip from Sourceforge, uncompress it, rename the directory and move it to have the file in the position shown above.

NOTE OF 17 April 2014: Pritpal added some new features but there are some problems compiling them. So please edit qtcontribs.hbp and rem these lines:

When completed you can check running hbide.

Opening menu Help -> About Harbour IDE you should get something like this: 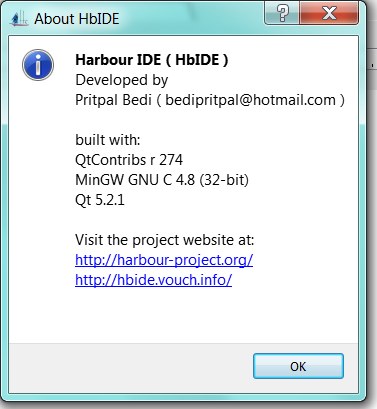 From now on, when you need to use this version of Harbour with this version of Qt you can run set_qt521.bat and compile your programs. Please note that you can compile programs that don’t use Qt !

2 thoughts on “Compiling Harbour for Qt from GIT”